During my research, I have come across my fair share of ancestors labeled as mulattos and other racial designations indicating that they may have black ancestry. To help me better understand I bought the book The Slave Trade by Hugh Thomas. As I have mentioned before some people go as far as to deny their African roots by saying that it is just a fluke on their DNA.

Through my research, I have come across some persons that have up to 14% African ancestry in their DNA. I’ve always wanted to know more about how they got to Mexico. I can only assume but I want to be able to make an educated guess and that is the reason that I am now reading another book by Hugh Thomas titled “The Slave Trade” I have yet to finish reading it but I thought I let you in on what I am reading. Since so far this book has not been disappointing. I already came across a familiar name Bartolome de las Casas.

I yet have to find out how much Mexico is mentioned in this book but so far the kings of Spain are mentioned and thus the Slave trade of the Spanish Empire will provide a great glimpse into the past. Hopefully, provide evidence of slave trade form the part of Africa that my DNA suggests my ancestors came from.

Cover of Book: The Slave Trade 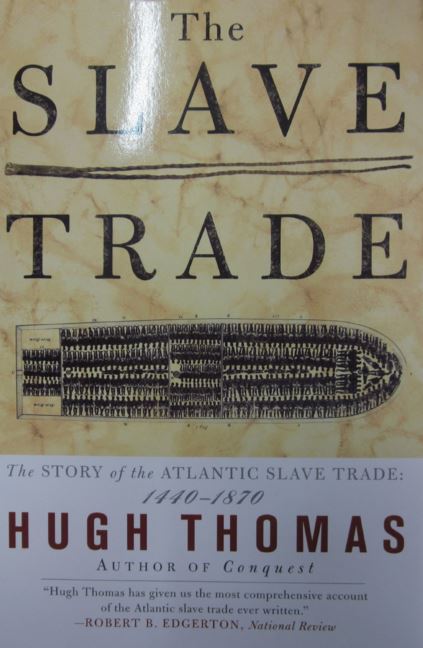 Description of the book the Slave Trade by Amazon:

After many years of research, award-winning historian Hugh Thomas portrays, in a balanced account, the complete history of the slave trade.

Beginning with the first Portuguese slaving expeditions, he describes and analyzes the rise of one of the largest and most elaborate maritime and commercial ventures in all of history. Between 1492 and 1870, approximately eleven million black slaves were carried from Africa to the Americas to work on plantations, in mines, or as servants in houses. The Slave Trade is alive with villains and heroes and illuminated by eyewitness accounts. Hugh Thomas’s achievement is not only to present a compelling history of the time but to answer as well such controversial questions as who the traders were, the extent of the profits, and why so many African rulers and peoples willingly collaborated. Thomas also movingly describes such accounts as are available from the slaves themselves.

Here is the table of contents of this book so that you may know exactly what it contains.

Book One: Green Sea of Darkness

What Heart Could be so Hard?

Humanity is Divided into Two

The Slaves Who Find the Gold Are All Black

The Portuguese Served for Setting Dogs to Spring the Game

I herded Them As If They Had Been Cattle

The Best and Strongest Slaves Available

For the Love of God, Give us a Pair of Slave Women

The White Men Arrived in Ships with Wings

Book Two: The internalization of the Trade

A Good Correspondence with the Blacks

The Black Slave is the Basis of the Hacienda

lawful to Set to Sea

He Who Knows How to Supply Slaves Will Share this Wealth

By the Grace of God

A Great Strait for Slaves

If You Want to Learn How to Pray, Go to Sea

God knows What we Shall do with those that remain

Above all a good soul

The loudest yelps for liberty

The Gauntlet Had Been Thrown Down

Men in Africa of As Fine Feeling As Ourselves

Why should we see Great Britain getting all the slave trade?

I see… We have not yet begun the Golden Age

The slaver is More Criminal than the Assassin

Only the poor Speak ill of the Slave Trade

Slave Harbors of the Nineteenth Century

Can we resist it the torrent? I think not

They all eagerly desire it, protect it, and almost sanctify it

Hugh Thomas has written numerous histories on the Spanish speaking world, including The Spanish Civil War, for which he won the Somerset Maugham Prize in 1962, Cuba or the Pursuit of Freedom, The Conquest of Mexico and The Slave Trade. His book The Unfinished History of the World won the first National Book Award for History in 1980. Hugh Thomas was chairman of the Centre for Policy Studies 1979-89 and was awarded a peerage as Lord Thomas of Swynnerton in 1981. – Amazon.com

At the moment of writing this the only place that I could find it was at Amazon.com and was selling starting used at $2.97 used and $16.66 new. If you are interested in buying this book click here BUY NOW to buy from Amazon.

I hope that you find this book useful and informative as I have. Please let me know in the comment area of what you thought about this book.

Other Posts Related to The Slave Trade

Mexico has a very rich African heritage and in this post, I elaborate on it a bit more: Our AfroMexican Ancestry