Here is another book that I recently acquired, it is titled “The Golden Empire Spain, Charles V, and The Creation of America” and it is written by Hugh Thomas. As you may remember three weeks ago I wrote about another book of his titled “The Rise of the Spanish Empire, From Columbus to Magellan“. That book is the predecessor to this one. This book is the second in a series of volumes about the Spanish empire.

You may be thinking that these books have nothing to do with Mexican Genealogy but they do. Spain was the cradle to many of our ancestors and also history as I have mentioned countless times gives perspective to the history of our ancestors, to the world they lived in, and by reading about others we can get an idea of how their lifestyle might have had been. History is a glimpse to a world that is gone but that is still present in the remnants of the past.

This book also provides great images and maps about Mexico and also the routes of most if not all of the major expeditions undertaken by the Spanish in both South and North America.

Cover of Book: The Golden Empire Spain, Charles V, and The Creation of America 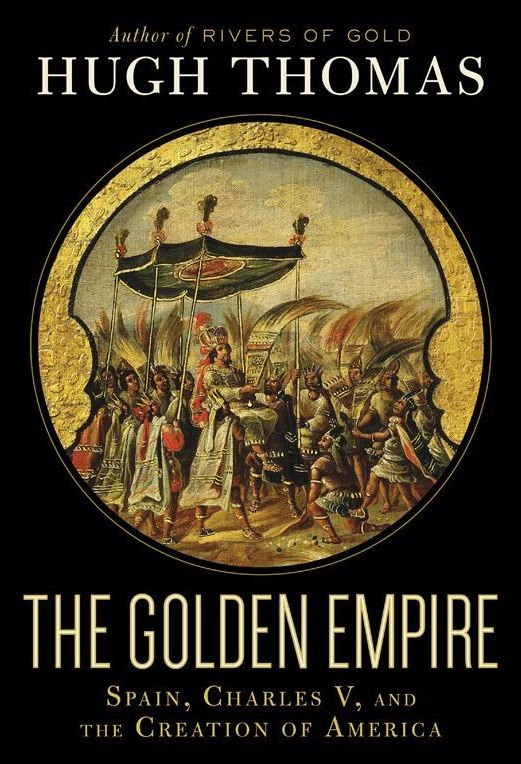 Description of the book The Golden Empire Spain, Charles V, and The Creation of America by Amazon:

From a master chronicler of Spanish history comes a magnificent work about the pivotal years from 1522 to 1566, when Spain was the greatest European power. Hugh Thomas has written a rich and riveting narrative of exploration, progress, and plunder. At its center is the unforgettable ruler who fought the French and expanded the Spanish empire, and the bold conquistadors who were his agents. Thomas brings to life King Charles V—first as a gangly and easygoing youth, then as a liberal statesman who exceeded all his predecessors in his ambitions for conquest (while making sure to maintain the humanity of his new subjects in the Americas), and finally as a besieged Catholic leader obsessed with Protestant heresy and interested only in profiting from those he presided over.

The Golden Empire also presents the legendary men whom King Charles V sent on perilous and unprecedented expeditions: Hernán Cortés, who ruled the “New Spain” of Mexico as an absolute monarch—and whose rebuilding of its capital, Tenochtitlan, was Spain’s greatest achievement in the sixteenth century; Francisco Pizarro, who set out with fewer than two hundred men for Peru, infamously executed the last independent Inca ruler, Atahualpa, and was finally murdered amid intrigue; and Hernando de Soto, whose glittering journey to settle land between Rio de la Palmas in Mexico and the southernmost keys of Florida ended in disappointment and death. Hugh Thomas reveals as never before their torturous journeys through jungles, their brutal sea voyages amid appalling storms and pirate attacks, and how a cash-hungry Charles backed them with loans—and bribes—obtained from his German banking friends.

A sweeping, compulsively readable saga of kings and conquests, armies and armadas, dominance and power, The Golden Empire is a crowning achievement of the Spanish world’s foremost historian. – Amazon.com

Here is the table of contents of this book so that you may know exactly what it contains.

A tale of two cities: New Spain and Old

Book I Valladolid and Rome

About the Author of The Golden Empire Spain, Charles V, and The Creation of America:

Hugh Thomas has written numerous histories on the Spanish speaking world, including The Spanish Civil War, for which he won the Somerset Maugham Prize in 1962, Cuba or the Pursuit of Freedom, The Conquest of Mexico and The Slave Trade. His book The Unfinished History of the World won the first National Book Award for History in 1980. Hugh Thomas was chairman of the Centre for Policy Studies 1979-89 and was awarded a peerage as Lord Thomas of Swynnerton in 1981.

At the moment of writing this the only place that I could find it was at Amazon.com and was selling starting at $18.99 for the Kindle and used starting at $42.93 new. If you are interested in buying this book click here BUY NOW to buy from Amazon.

Other Books That May be of Interest to You

I hope that you find this book useful and informative as I have. Please let me know in the comment area of what you thought about this book.